This website stores cookies on your computer. These cookies are used to collect information about how you interact with our website and allow us to remember you. We use this information in order to improve and customize your browsing experience and for analytics and metrics about our visitors both on this website and other media. To find out more about the cookies we use, see our Privacy Policy

We believe, we are striding into the next phase of human evolution where technology negates the human miseries and we humans can work towards sustaining humanity. We constantly focus on innovations to make this future closer to us.

DOWNLOAD PDF
Learn on How to develop an Online Education Platform

Here's a step-by-step checklist to get your e-Learning project off the ground. This guide includes technical functionalities, a feature list, and more viable information for your project.

Do you intend to create an NFT marketplace? Do you want to learn how to build an NFT marketplace platform from the ground up? Here's a handy checklist to get you started. This document contains technical specifications, a feature list, and other useful information for your NFT project.

Are you wondering how to move forward with Crypto Exchange development? Here is a checklist guide to help you get started with it. This guide includes technical functionalities, a feature list, and more viable information for your project.

DOWNLOAD PDF
The Scope of Business Modernisation with NFTs

The recent updates in the NFT domain are quite surprising. As NFT tokens are being sold for millions, and images, emojis, etc being auctioned at record value make one wonder what is happening in this sector. In this whitepaper, we discuss the business modernization opportunities with NFTs.

To curb the COVID-19 crisis a reliable pandemic management system is necessary. Rebuild The Chain - pandemic management system built by our team offers a smooth operational platform for the health authorities. It delivers location-based data, citizens data, healthcare facility data and real-time insights on pandemic spread, infected persons route maps and possible locations in the economy for an outbreak.

For every business, data is a valuable element that drives business growth and technological innovations. Through careful breakdown of this data, hidden insights on business processes and activities could be unlocked which can even make them perform better.

DOWNLOAD PDF
HOW TO GAIN INVESTORS’ TRUST IN YOUR ICO, STO ?

The General Tokenization Manifesto specifies the standards to successfully launch an ICO and STO. Aiming to make the ICO community self policing in order to make them capable of solving the problems encountered by ICO domains today.

This whitepaper explains artificial intelligence revolutionizes your business by delivering better business returns and process efficiency. Moreover the challenges faced while adopting AI in to a business is also described here.

Google’s products and services are currently being used by billions of people all over the world. This is why any kind of security threat can have extremely severe consequences. Akhil Sabu, a cybersecurity analyst at Accubits Technologies discovered a security bug in one of Google’s applications and was enlisted in Google’s Hall of Fame when he reported it.

Akhil Sabu recognized a subdomain takeover vulnerability in one of Google’s applications. This would allow an attacker to set up a page on the service that was being used and point their page to that subdomain and claim it as their own. Sabu has been participating in such bug bounty programs since his college days and has been featured in the Hall of Fame of various other organizations like Inflectra, Indeed, and the University of Victoria. 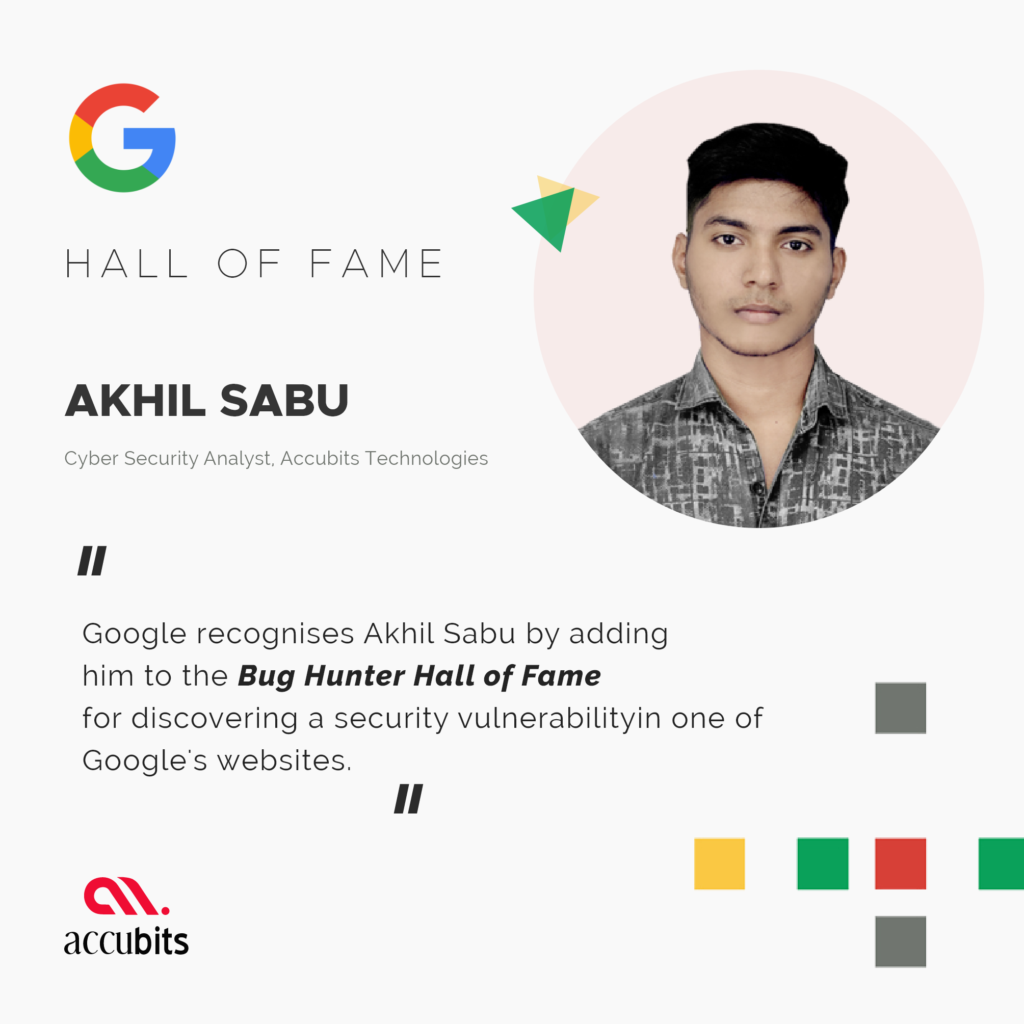 In November 2010, Google launched a Vulnerability Reward Program for Google-owned web properties. Under the program, anyone who can identify and report any vulnerability in Google-developed apps, extensions, hardware devices, or any other web properties is eligible to receive monetary rewards for their effort. A reward panel will come to a decision on the final reward based on the severity of the issue. The company stated that they’ve received more than 8,500 vulnerability reports and paid rewards over $5 million. Any design or implementation issue that substantially affects the confidentiality or integrity of user data is likely to qualify for the program. A few examples of such vulnerabilities would be Cross-site scripting, Cross-site request forgery, Mixed-content scripts, Authentication or authorization flaws, Server-side code execution bugs, etc

Google will also feature the individual who reports the bug in its Hall of Fame. The bug reporters are ranked according to the number of valid bug reports they have sent in, the severity of the bug, how recent the report was and the amount of money contributed to charity. Akhil Sabu is working as a cybersecurity analyst at Accubits Technologies, specializing in computer and network security, vulnerability assessment, malware analysis, and Incident Response.